Central, Parramatta, Blacktown, Springwood . . . My thoughts drifted off as I read my book, and watched the station passed by. Soon, I lost count of them, and my eye lids became heavy as though she had sang a lullaby softly in my ears…

I hit the blue mountain next, an area known for her magnificent scenaries. It’s a very beautiful place; fantastic view up in the mountains, with the three sisters being the highlight.

There’s just something old fashion about Katoomba that seduces me, right from the start when I arrived on the train station, to the country-like signage and shops around; everything was so laid-back and time seemed to pause and slow down.

I stayed in a hostel called the Flying fox, it was quite unlike the other ones that I stayed in before. Here, everyone knows everyone as it is quite a small place, people come and go but most of them don’t really leave – they’d come back. Here, you have a bunch of friendly folks, it’s akin like having a mini United Nations; Germany, Canada, UK, Italy – people from all over the world staying under one roof.

Shall I tell you about the mountains, and the splendid view at the three sisters? No, the lonely planet or any other reputable guide will do a better job in educating you. I’m also sure you’d not want to listen to how I went on a four hour mountain hike with a German dude, wearing less than proper shoes and ended up having blisters all over my foot, and having the irritating flies (summer time) bugging me the whole afternoon. All you need to know: get yourself to Echo Point – the tip with the breathtaking view overlooking the three sisters.

One of the place in the town of Katoomba that serves burger is Greco’s. The shop is like a fast food restaurant, one of the room-mate told me they served pretty decent burgers at reasonable price.

It’s kind of sad that it took me until now to realize, a beef burger taste absolutely wicked with the addition of a slice of BBQ pineapple, the beef burger probably isn’t very appealing with the thin patty and flat buns, but when you up-sized it to the lot ($7), all’s good. The extra egg, bacon, pineapple added volume to the otherwise ordinary burger. Initially, I felt that the burger looked way too small, but it was only when I tried to put it into my mouth, and failed then I realized how big it was.

Further down the street, there’s a Chinese-operated takeaway shop that goes under the mundane name of Blue Mountain Seafood Fish & Chips. Surprisingly, their fish & chips ($7.5) are really quite good; the batter was crispy and not over oily – one of the better fish & chips that I’ve had. The next day I tried their beef burger ($5), but it was somewhat ordinary, I preferred the burger from Greco’s.

There’s also another small town in Blue Mountain where chocolate comes from. I should make myself clearer; Leura is a small town in Blue Mountain that is five minutes away from Katoomba, and they have a famous chocolateria, probably one of the finest in Sydney and her name is Jodie. If you are a chocolate lover, and you’ve spent some serious time researching about them, you will definitely know about her chocolates. I’m sure you probably heard of Adriano Zumbo when you Google for ‘desserts’ & ‘Sydney’, and Jodie actually beat Zumbo in a recent competition. I don’t really give a hoot to such competitions – whichever chocolate that I like, is the best chocolate.

I went to Jodie’s Josophan chocolate boutique first. Stepping into the shop, the lovely chocolate scent greets you, and all around, are chocolates, chocolates and more chocolates. Besides different type of chocolate blocks that has contain nuts like hazelnut, almond, macadamia nuts, their specialty chocolate comes in very unique flavor too. I got a box of four which contains peanut butter cup, hazelnut praline, Kahlua kisses, and hot chili. 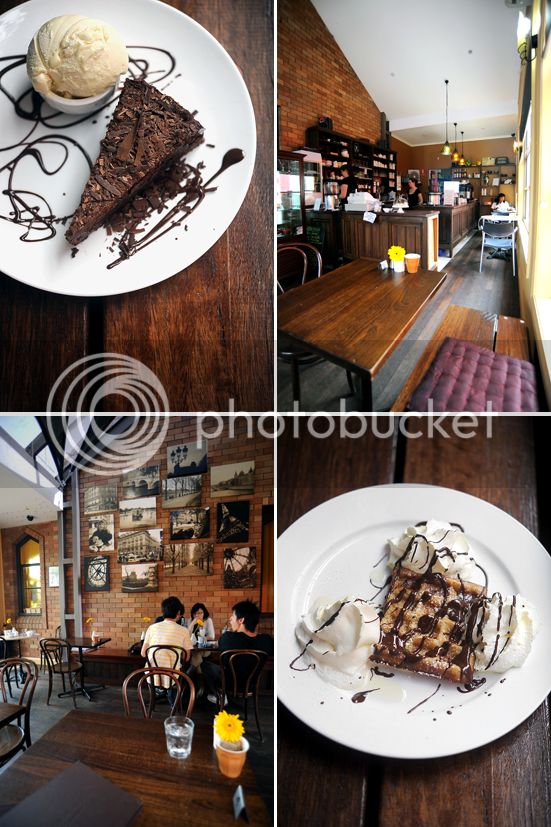 Heading across the main street, I stumbled upon Jodie’s standalone cafe next. Hot chocolate, sweet desserts, and breakfast items – that’s Cafe Josophan for you. Chocolate is much more effective than therapy, and no appointment is required.

Their cake selections were actually smaller than I expected, with about five to six cakes available to choose from. I’ve the Mexican Chocolate Cake ($10.5) that came with a scoop of ice cream, it was essentially made from a recipe using 70% cocoa solids chocolate. As much as I like sweet stuff, another cake would be too much to handle, so I went for the house made Belgian waffles ($11.50 for 2 waffle). Sweet heavenly chocolate drizzled on the thin waffles, served with fresh cream, pretty much the breakfast I’ve in mind. But the waffle wasn’t warm and crispy enough. Pity. I’d love to go for the hot chocolate, and flourless chocolate torte if I ever re-visit again – talk about chocolate overdose.

Dining out in Australia is very costly, so I went to the butchery and got myself a steak and two sausages – for just $3.50. It was nearly dinner time then I realized I totally forgotten to marinate the steak. Oh boy, I hastily sprinkled some pepper, salt, nutmeg, cinnamon powder – whatever spices that seem edible.

Proceeding to barbecuing the meats, it was pretty exciting (and smokey) to watch the meat changed from red to light brown, and then a darker shade of brown. It was trial and error since I did not know how long to cook the steak, but it was easy peasy with the sausages as I waited for them to turn slightly charred on the outside.

Even the steak was slightly overcooked, it was still damn awesome. The two sausages were glorious too, you could see the glittering of oil on the surfaces, and they tasted so, so good! Under the influence of beer, and sitting in the backyard with a breeze blowing gently – this simple dinner suddenly became one of my best meals.

Chocolates! Another reason to schedule a visit to Sydney. I shall bookmark this for future use. Hahaha.. I really like their homely and woody furnishings, it’s so.. country.

hey ur photos are nice!

OMG! Josophan chocolate boutique!! I was there in June, trying to escape the cold of winter via a mug of Hot CHocolate and one Angel Wing biscuit. *dreamy sigh*

ask u 1 qns. what adjustment i shld do for my cam if the photo are to be taken under warm yellow light?

That opening shot is amazing. Kind of reminds me of something out of the Lord of the Rings.

I’ll have to keep that chocolate place in mind the next time I head out to the mountains. Good to see you’re not getting sucked into the touristy traps so much

thanks for ur recommendations! I’ve been to Leura once on a Blue Mountains tour quick stopover..I’ll definitely try to keep in mind..btw, where did u get information on hiking on blue mountains? is there any website you could recommend?

HAHAHAH Niiicee u got the Australian way down pat with the bbq and beer! GW! As always ur photos are breathtaking

As always, the photos turned out really good! Sharp, Crisp and clean. Looks like a magazine spread! I’ve much more to learn!

We went to the same chocolate shops.. in the same area. your pictures turned out to be so nice . even my mum who is standing behind me commented that the pictures are so nice.

makes me want to go back to Sydney.

Sarah: there’s always too many reasons (excuses) for us to go traveling : )

chiewmei: Nice, did you buy back her chocolates?

Simon: Yeah you should go try her chocolate, billy was the one who told me about it.

Chinesechic: Nope i did not check any websites, when i was staying at the hostels i asked around and see where the others went, and they are more than happy to tell me which direction to go

Ffichiban: there’s nothing like sausages and beer my friend!

reiz: thanks for your kind words : )

stef: did you try any of her chocolate? they are so good!

yes, I did. I tried the milk, white and dark chocolate. In fact, my sister had bought the whole family to the blun mountain just to have a cup of hot chocolate and their cakes.

The cakes were so good! the total bill for 5 person came up to $75 AUD. but it was worth the drive there.

natania: Oh yes, the long train ride is worth the while : )

There are a few great restaurants in blackheath in the blue mountains. Ashcrofts and Vulcans

Denise: hahaha i went there alone so it was quite difficult for me to check out restaurants

Bndq8: Thanks! i know, that burger looks so good right? i’m hungry too